Over 60s are well able to think and decide for themselves. They have reached a stage in life where they have great resources in knowledge, talent and understanding. The 60s Up movement was started in 1982 by the late Mr. Bill Sievwright to fill what was perceived to be a void in the social pattern of the country.

There was no national body speaking for the older citizen, nor to combat the accepted idea that being over 60 is closely linked with frailty, apathy and resignation from the good things in life. Those speaking for older people were mainly the younger people who felt that they had all the answers to the needs and thinking of the elderly. The Movement contested this. The qualities of age are too often overlooked, and especially since World War 2 the emphasis has been on youth.

The Movement aims to promote causes that allow older people to maintain a comfortable standard of living. We are constantly keeping an eye on Public Health Services, Superanuation, Licences as well as services provided by Government, Local Body and Private Institutions and Businesses for the older people.

After retiring following 41 years of service in the Defence Dept. Bill and Margaret Sievwright took their big OE to the United States. While there they came in touch with a movement called the 'Grey Panthers', a group of elderly folk in the United States.

On returning to New Zealand he called a public meeting in Auckland in March 1982 and so the Movement was born. 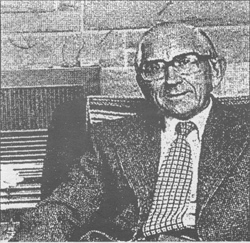 Why did he bother? He said that it was because "he wanted folk to get together and have fun in their retirement." He told the Herald that " people had to stop thinking that retirement meant it was time to curl up and grow old."
"It should not be the closing on one door" he said," but the opening of another.'

"I always say," he said, "It's not the old folk who are the beneficiaries, but the youngsters. You're living off the benefits of all the hard work we ploughed into the country for years on end."

After he retired he realized he was free from the work routine. He decided with nothing to lose and everything to gain he could live dangerously. "When you're a youngster," Bill said, "you've got your parents or school. When you work you've got to listen to your boss and toe the office line. I'm a real revolutionary at heart and it was great to suddenly not to have to do either."

The movement started in a small way on the North Shore, in 1982, Now, 25 year later, has 30 Branches and 3,500 members scattered throughout New Zealand.